This is a category navigation menu. Pressing on a link will take you to the desired category

Redundancies and Back-Up Systems: The Keys to a Streamlined RAS

Back to the blog

The measure of economic and commercial success of RAS (Recirculating Aquaculture System) based facilities is the ability to consistently deliver the planned volume of fish, on time. Therefore, any deviation from the facility’s production plan has serious economic and operational implications. Beyond the obvious goal of avoiding any event leading to fish mortality, a facility is required to work flawlessly 24/7/365. Moreover, without adequate redundant systems the facility may require more manpower to ensure proper and ongoing operations.

With the aim of providing our customers a safe, low-risk solution to this conundrum, we at AquaMaof have developed a complete fish production solution that operates smoothly and also offers multiple redundancies and back-up systems.

In this regard, AquaMaof’s technology design concept is based upon dividing its RAS-based facility into independent bio-secured production modules. This assures continued operation of the facility even in the rare event of a setback, disease contamination or other deficiency, in any single module. Furthermore, in the event of any kind of failure or malfunction of any single module, a harvest channel allows for the fast and efficient transfer of fish, avoiding mass mortality.

In addition to this safety-assuring capability, almost every system within the AquaMaof solution has multiple back-up components, ensuring continuous uninterrupted operations. These include:

AquaMaof’s proprietary Oxygen Dissolving System (ODS) achieves high dissolving efficiency – up to 80mg/liter – with minimal electricity consumption. External factors, however, such as a lack of adequate maintenance and human error, can create a chain of events that can end with the failure of these critical systems. As a backup, in the case of a rare malfunction in one of the ODS’s, AquaMaof’s RAS design includes two or more ODS in each large tank.

Furthermore, in the event of a major electrical power outage, or system failures, backup LOX (liquid oxygen) tanks are automatically engaged and act as the redundant oxygen supply system to the oxygen generator.

In addition, duplicate oxygen supply piping to all use points is designed into the system, with each piping system supplying the facility’s entire oxygen requirement, if needed.

Emergency oxygen diffusers are also used as backup to the ODS. Operating from the emergency oxygen line, they automatically supply oxygen to each fish production tank any time the dissolved oxygen concentrations fall below the set point. These will sustain fish during a complete electrical or pump failure.

Finally, duplicate pressure regulators and check valves are installed on the oxygen-supply manifold to ensure continuous oxygen flow and the system also includes an immediate and automatic switch from the oxygen generator source to LOX, without requiring a control signal. 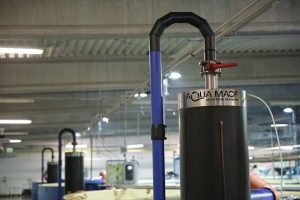 The AquaMaof process is designed to use as little electricity as possible. There are, however, still critical components dependent on a continuous supply of this important resource. In case of an electrical breakdown, therefore, we have established the following multi-layer preventions:

The first layer is a backup electric generator, which supplies the entire system with power during an outage. As a second layer, AquaMaof encourages its clients to integrate additional generators into the facility so that, in the event that one generator fails – the redundant generator/s can continue to feed the plant with the electricity supply required.

Also, in the power design of each building’s main low-voltage switchboard, there is an available connection for a portable generator acting as a third layer of electricity back-up. Thus, no single electrical component failure will cause a shutdown of the entire facility. 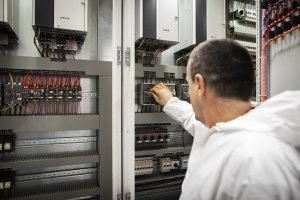 In the event of a leak, pipe damage, or valve failure in one of the pipe supply systems, the AquaMaof RAS design includes duplicate water circulation piping to each fish production tank, assuring continued and uninterrupted water flow. This design uses gravity flow of water through the complete system and pumping sumps with multiple pumps installed.

Moreover, solid waste settlers are designed as multiple settlers within each production module. This way the system can continue operations should any single settler go off-line.

The AquaMaof CIFT biofilter is designed in segments, according to water distribution components. In the event of a system failure in any segment of the CIFT biofilter, operations continue, and the system automatically distributes the water across the remaining segments within each module.

Floor drains are specifically designed so that they drain into the sewer system. This way, water from regular operations such as washing the floor will not reach the process water. In addition, in the event of a large water spill, or a tank or circulation pipe failure that risks reducing the water level in pump sumps, the floor drains are designed to recycle these large quantities of water back into the system. 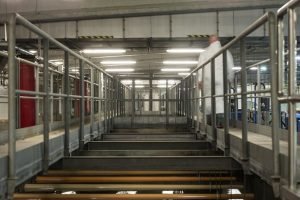 Moreover, the analytical sensors are digital and store their own calibration data, so they can be easily replaced or exchanged.

A facility’s ability to properly and consistently execute the production plan is directly related to its economic success and thus, the ability to generate the planned profits for its owners. This recognition is at the heart of AquaMaof’s RAS technology, with its extensive redundancies and back-up systems, all with the aim of preventing the loss of fish and revenue while assuring scheduled production is achieved as planned.

Back to the blog

Join us in making nutritious seafood accessible to all

You have questions? We have answers.

What would you like to talk to us about?

Questions about technology, projects, investments, or any other thing? Just contact our team.

at the palm
of your hand
Join Our Newsletter
Thank you!
You are now subscribed to our newsletter.